Raksha Bandhan is the Hindu festival that celebrates the unique bond between a brother and a sister. Raksha Bandhan means a thread for protection. According to the Hindu calendar, ‘Rakhi’ is celebrated on the full moon in the month of Shravan (August). This festival is celebrated in all parts of India with different forms. 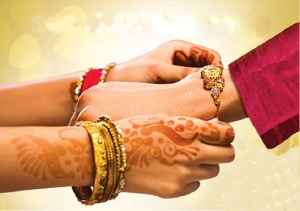 On the occasion of this festival sisters apply tilak to the forehead of their brothers, tie the sacred thread called Rakhi to the wrist of their brothers and do aarti and pray for their good health & long life on the other hand brother promises to guard his sister throughout .

This thread, which represents love and sublime sentiments, is called the ‘Raksha Bandhan’  means ‘a bond of protection’. The festival also indulges into some exchange of gifts between the two which makes it even more special.

This festival is celebrated with great enthusiasm every year. The preparations begin much earlier than the actual day. Colorful rakhis are available in the market some 20 days before the festival. Sisters start their Rakhi shopping one or two weeks in advance.

The traditional rakhi style is associated with the simple fragile ‘thread’, ‘dora’, ‘dhaga’, ‘mouli’ but in the modern days it has transformed itself into a trendy, fashionable and more elegant in looks. Designer rakhis in silver and gold are also made by rakhi designers. Zari, beads, stones, satin, pearls are used to make rakhi more sylish. 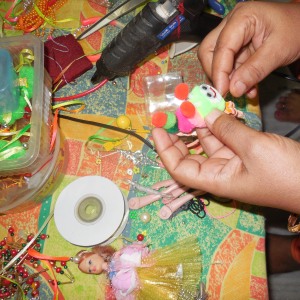 Rakhis are ideally made of silk with gold and silver threads, beautifully crafted embroidered sequins, and studded with semi-precious stones.

Mouli Rakhi is made of a sacred thread called Mouli, which is used in the Hindu dharma, and is tied on wrists before performing rituals. It is used since the ancient times.

The Resham Rakhi or Silk Rakhi has been traditionally since ages. These rakhis are much decorated and are popular among people of all ages.

The preparations begin much earlier than the actual day.

With the passage of time, the style of rakhi threads has changed into chains plated with gold or silver. Now a days you get different styles of rakhis like, chocolate rakhi, super hero rakhi, cartoon rakhi. 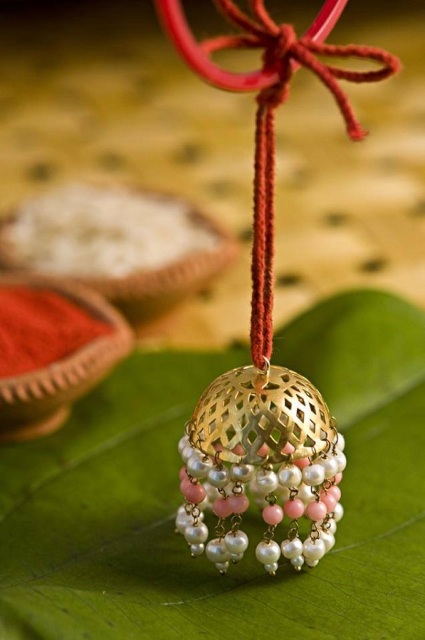 Lumba rakhi also has a special significance. The Lumba Rakhi is a very special type of Rakhi, which are meant for the sister-in-laws (your brother’s wife or bhabhi).The Lumba Rakhis are quite different than traditional Rakhis in terms of appearance. These Rakhis are more slender, and vibrant than the traditional Rakhis which are meant for boys, and men. The vibrant color of these Rakhis makes them more beautiful, when they are complimented with the colorful traditional Indian attire.

Raksha Bandhan symbolizes the unmatched bond of love, care and respect. But in a broader perspective the festival of Raksha Bandhan conveys an intrinsic message of universal brotherhood and sisterhood.

Gold leaf work finds it origin in the royal city of Jaipur. You will see the gold leaf work designs on wall, ceiling, dome, furniture, marble, paintings and also on the jewellery and accessories.

Gold Leaf design work gives a royal and elegant look to the object and to the location. These marble artistic pieces have a pure gold leaf on it. These are hand crafted pure white rajasthani marble artifacts with colours of red and green with gold leaf and white kundan work that is sure to catch anyone’s eye.

Gold leaves are extremely thin sheets of gold, known as “Varak”.  First designs are imprinted on the marble object, then the gold leaf sheet is pressed on to the painted motifs while it is still wet and thus the sheet sticks to it. 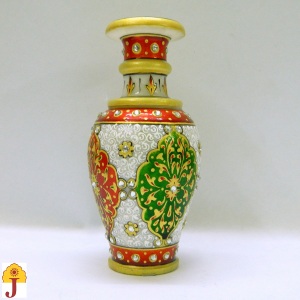 Then imitation gemstones and coloured glass stones are stuck to motifs which enhance the beautiful artwork with added glitter. This process is finished with the last step of lacquer coating on the object to protect the work and gives it a finishing touch and making it more durable.

When you’re looking for something that is beautiful, with little artistic touch, different in style and to change your look, a hand-painted scarf can be the best choice. It’s a must-have accessory. Now express your uniqueness with these hand painted silk scarves available in lovely pastel colours. 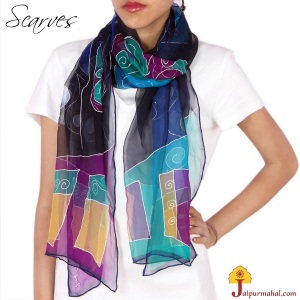 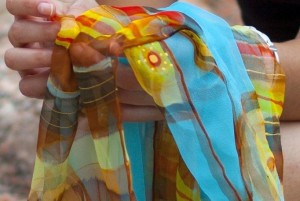 You contribute to improving the living conditions of women and disadvantaged families in Varanasi. It has taken many hours of artisans and skilled hands to make each natural silk handkerchief.

Choora is a Hindi word for set of bangles. Bridal chura is the first accessory which comes in mind with your wedding dress selection. These wedding bangles on the wrist of a lady indicates that she is newly-wed. 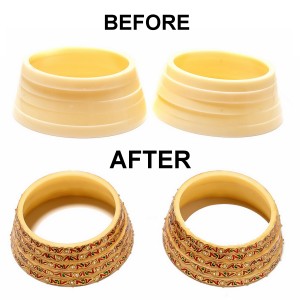 This is before and after the gold leaf Meenakari work

Choora is usually a set of 21 bangles for each arm. This number can vary. It comes in various shades of red – crimson red , maroon red , along with the combination of white bangles. Earlier Churas were made using ivory or sea shells in red and white colour.  Since they are the set of 21 bangles, size varies in circumference increasing from wrist to elbow.

Bridal chura is in a traditional, ethnic design. This set is specially designed by our skilled artisan for the lovely bride with the beautiful gold leaf and traditional rajasthani meenakari work and kundan stones.

Bridal chura is in a traditional, ethnic design. This set is specially designed by our skilled artisan for the lovely bride with the beautiful gold leaf and traditional rajasthani meenakari work and kundan stones.

This bridal chura is in a traditional, ethnic design. This set is specially designed by our skilled artisan for the lovely bride with the beautiful gold leaf and traditional rajasthani meenakari work and kundan stones. The work is in 24k gold leaf work on the acrylic base.

Indian wedding jewellery has the most extravagant assortment of delicately crafted pieces.

With so much of tradition attached to them, it is not surprising that till today the would be brides our very much particular about the selection of their bridal chura set and they want it to be as personalized and as unique as possible. As this bridal chura is going to be the symbol of their newly wedded status and will be part of their identity.

India has been ruled by different empires over the past many years. All these empires have left an indelible mark on the Indian jewelry. The Mughals gave their distinctive style of using precious stones and intricate carvings, the Rajputs had their enameled jewelry. Combination of these two techniques gave birth to Jaipur’s famous Meenakari.

It is this Mughal-Rajput inspired art of jewellery making which inspired us to bring this special collection of jewellery called Marigold collection where jaipur’s famous artistic meenakari combines with the exquisite Kundan technique in 24k gold leaf work.

How is it done?

First, a basic form of the jewellery is created with hollow spaces allowed for the stones to be inserted. Then it is filled with lac and artisan engraves delicate designs on it. Lines are engraved to hold different colors. First the colors, which require the maximum temperature, are filled in and fired. Then the other colors are applied and fired until both the sides are enameled properly. Then comes the Kundan work in which coloured stones are placed in their respective area. The piece is then polished with a leather cloth. Different types of jewel items are prepared by this method. . In Meenakari, enameling is done to protect gold and floral pattern coloured in red, blue and green which attracts the attention.

This exotic handcrafted collection is designed by our skilled craftsmen. All the pieces in our collection are engraved with different traditional floral designs that embodies tradition and beauty. 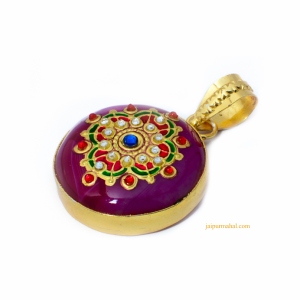 This exotic handcrafted collection is designed by our skilled craftsmen. All the pieces in our collection are engraved with different traditional floral designs that embodies tradition and beauty. So go ahead and grace yourself with this multicolour meenakari work and you will captivate the world without a doubt.

The Patwa Jewellery finds its origin from Patwa community who originated from North India. The community was traditionally associated with threading of beads and binding together of silver and gold threads. From them this art was spread to various parts of India and adopted by other people. 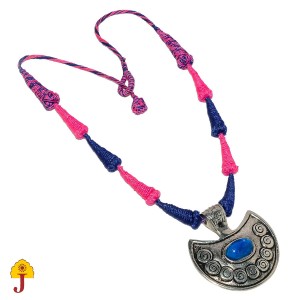 Now this art of knot tying and their weaving skills has become a motivating tool for Anoothi women whousing colourful threads and beads weaves them into fashionable and fancy Patwa knot jewelry. This jewellery surely sets to bring out the elegance & beauty which lies within you.